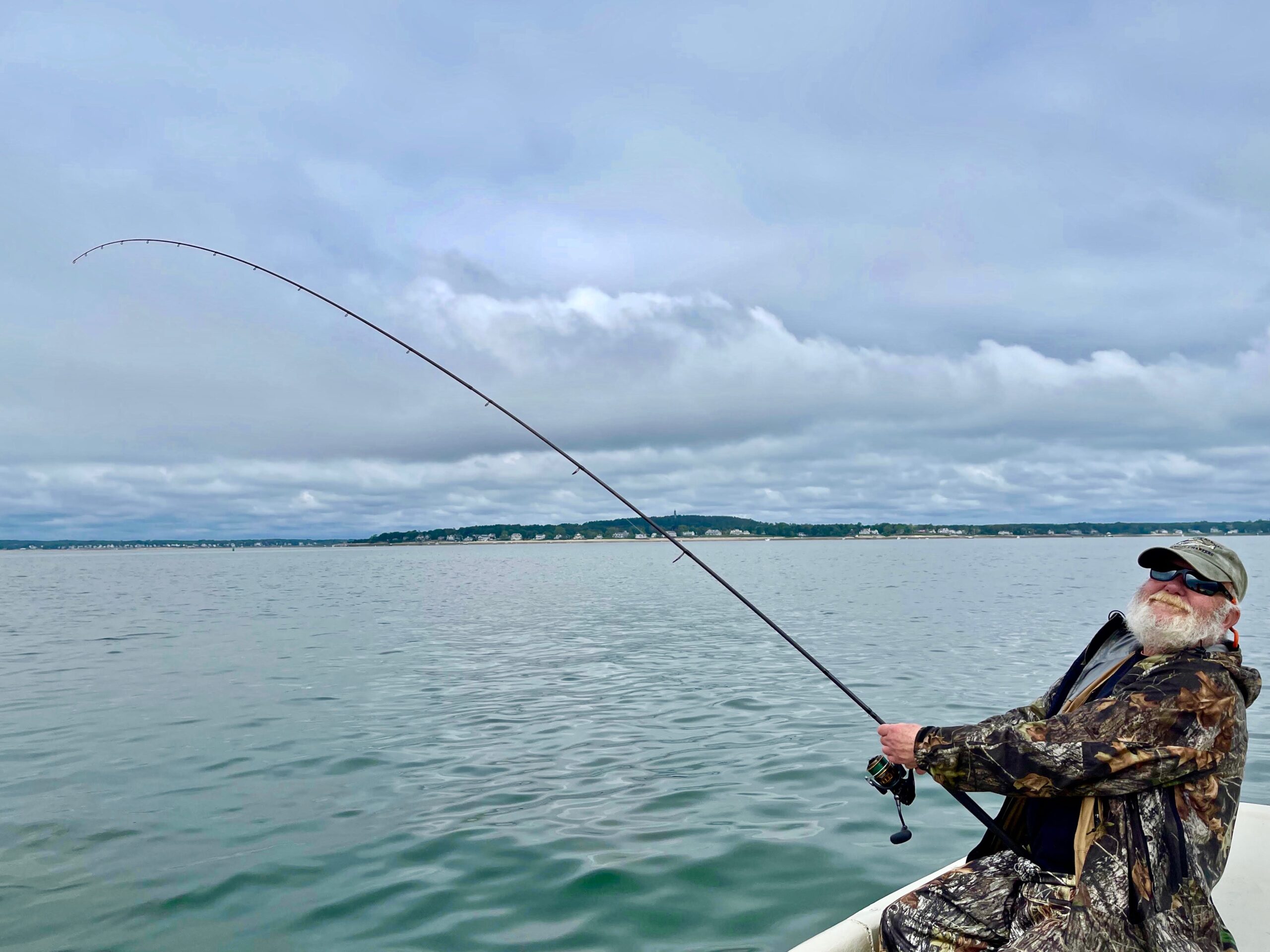 On board today, one of my regulars, Baymen Dick Bowman, for his birthday charter – light tackle striped bass!

At first light, dead-calm and overcast on the bay and it stayed that way all morning. If you saw my Thursday Baymen Report, you noted we boated and released 45 fish. I was expecting a repeat today – but how wrong I was!

We started the morning fishing structure and rips around the bay with topwater poppers. Dick asked me to fish with him today, so I grudgingly agreed :o) Dick had two BIG blow ups on his Hogy popper but no takes. Hmmmm…. What is up with that? Then, we had a few more blow ups and still no hook-ups. Conditions looked absolutely perfect, but the fish were being a finicky.

On to the next spot and we marked ( I kid you not) a school of two-hundred striped bass feeding on bait in about 25 fow. We got two drifts and hooked two fish. On the third drift all the fish vanished! Some large seals showed up and we figured they spooked all those bass right down the channel and out of the bay?

We moved on to the best known Rip on the bay and not a bump. Several other boats joined us and left. I reasoned those two-hundred bass I marked earlier may have returned and we cruised up and down the channel but never saw them again – but we did see more seals!

Several hours into our charter and we had just two fish. A very slow, but gorgeous morning. How can you have a bad morning on your birthday charter? I decided to change things up and switch out our topwater poppers and rubber crankbaits to my Baymen Jigs in 1 oz and troll them to try and locate fish. BINGO! We hooked into our third fish of the morning. Then, we moved to another spot and began to hook up regularly. The key was to get your tackle down right on the bottom. That’s where the fish were.

We continued to troll and cast and troll some more and we continued to hook up on fish. One angler in particular outfished the other angler by a significant amount, off the back of the boat, but we won’t mention any names…. :o)  If we did not have Baymen Jigs with us today, we would of landed and released only a couple of fish. But with the jigs on the bottom, we ended the morning with 17 fish! A great day on the bay.