At first light, a high tide and flat calm seas. As we headed out across the bay it was eerily quiet. No birds, no bait, and no topwater action. I decided to check a location that sometimes holds fish on this tide, at this time of day and lucky us – they were there! We pulled into a topwater blitz of bass, bait and birds and began to hook up. We tried topwater and got a few. Then switched up to rubber crank baits and landed several more. A BIG fish slammed the crank bait, made a scorching run, and straightened the hook. Heartbreaker of a fish and we never got a look at him. We continued to work this school of bass for a solid half-hour before they went down and vanished, never to show again on sonar or on topwater. 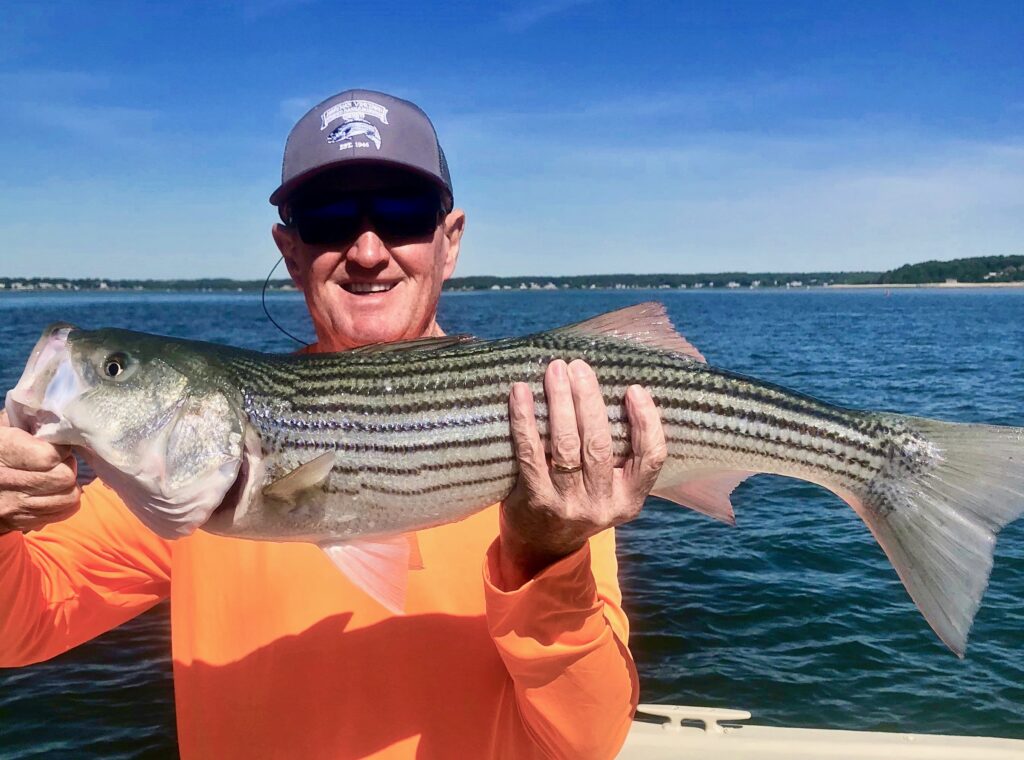 Next up, we can across the bay where I found fish Saturday, and we trolled Baymen Jigs to no avail. No fish, no bait. From there, we checked on one of the rip lines on the dropping tide, which usually holds fish. But not today. Not a single bump.

We moved on to another spot I like to fish with Jigs in 18-24 fow. BINGO! The sonar lit up and showed ups singles and schools of fish on bait right on the bottom. We began to work the Baymen Jigs and hooked up right away. Joe landed a fat keeper that will be gracing some dinner tables this evening. We landed and released another fish that was a 28″ and several more that taped out 26-27″ inches.

No sign of seals today. There were some hickory shad in the harbor as we headed out. Also, I saw a couple of bait fish about 2″ inches long, very slim and narrow, silver with dark olive backs. That was the primary bait the fish were feeding on today, although I have an idea they were also feeding on green crabs on the bottom.

The bay was just lovely, flat-calm with barely a ripple. One of those nice days you really enjoy on the water. Total catch and release today: 17 fish, most of them on Baymen Jigs.