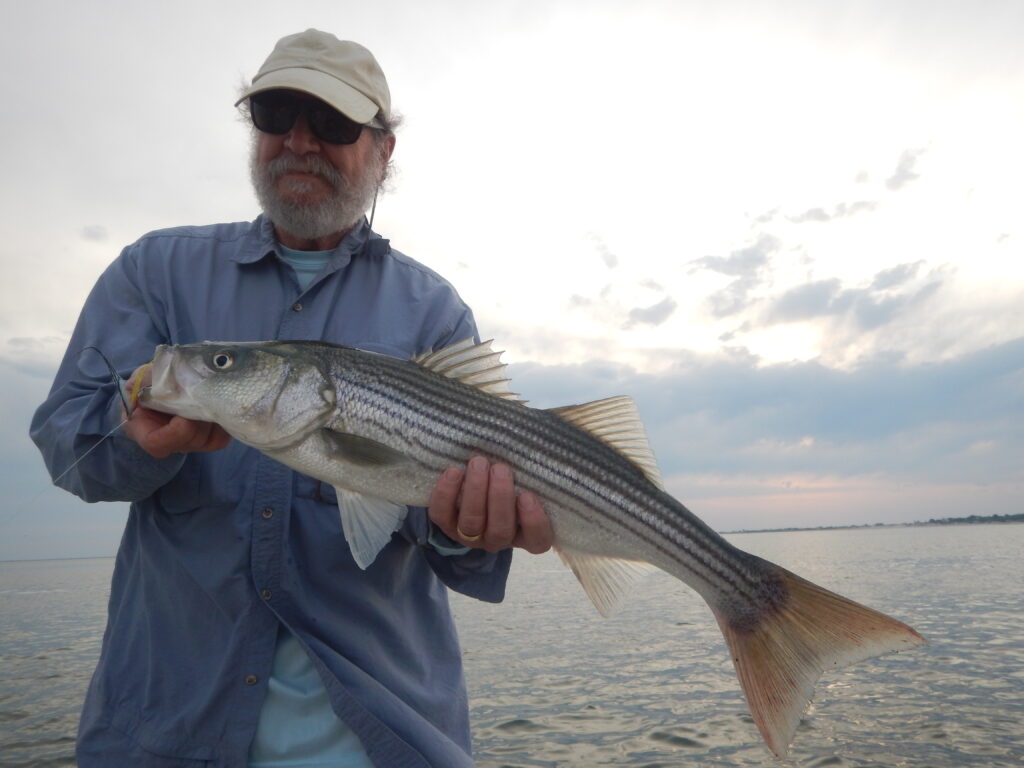 On board today, Mr. Greg Sanchez, for his fly or die birthday charter.

At first light, near calm seas, sunny and lovely like a summer day. We found fish pretty fast and Greg landed a fine fly rod fish on his second cast. A shot time later, another nice fish was landed on the fly rod on Greg’s own pattern that he tied that reminded me of a Razzle Dazzle. A great pattern. 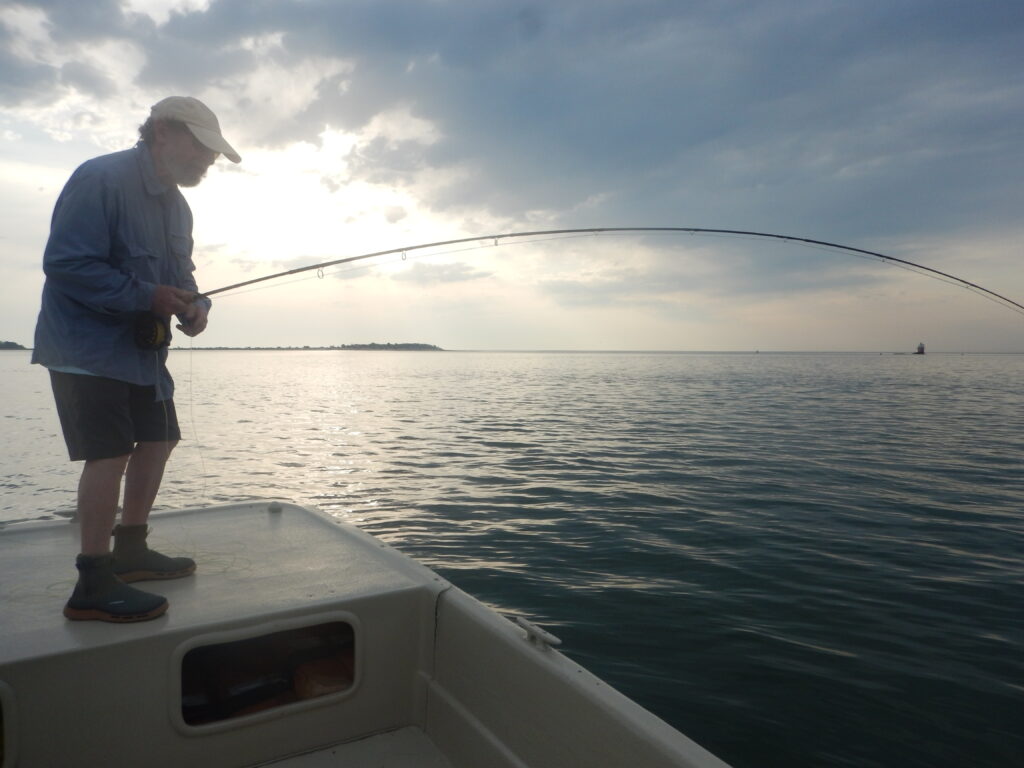 Tide went slack on the dead low and a little breeze picked up making drifts a little more difficult. We landed a few more fish and then switched up to a clouser pattern on the Greg’s 10wt Loomis. As we moved to set the next drift, I told Greg to let all his line out to take out any tangles in the line. WHAM! Another fine bass on the fly.

We moved on to a new spot and picked up one fish, and then moved again to try and find some protection from the wind. We were fishing a nice piece of water that offered some shelter when Greg had a hard hit on a keeper striped bass! A great fight in 4 fow on the 10wt. We took some pics and released the fish. Then, we heard a roar up bay like a big wind. Within seconds, the bay went from a touch choppy to solid four footers and a 25 knot East wind! We got hammered! 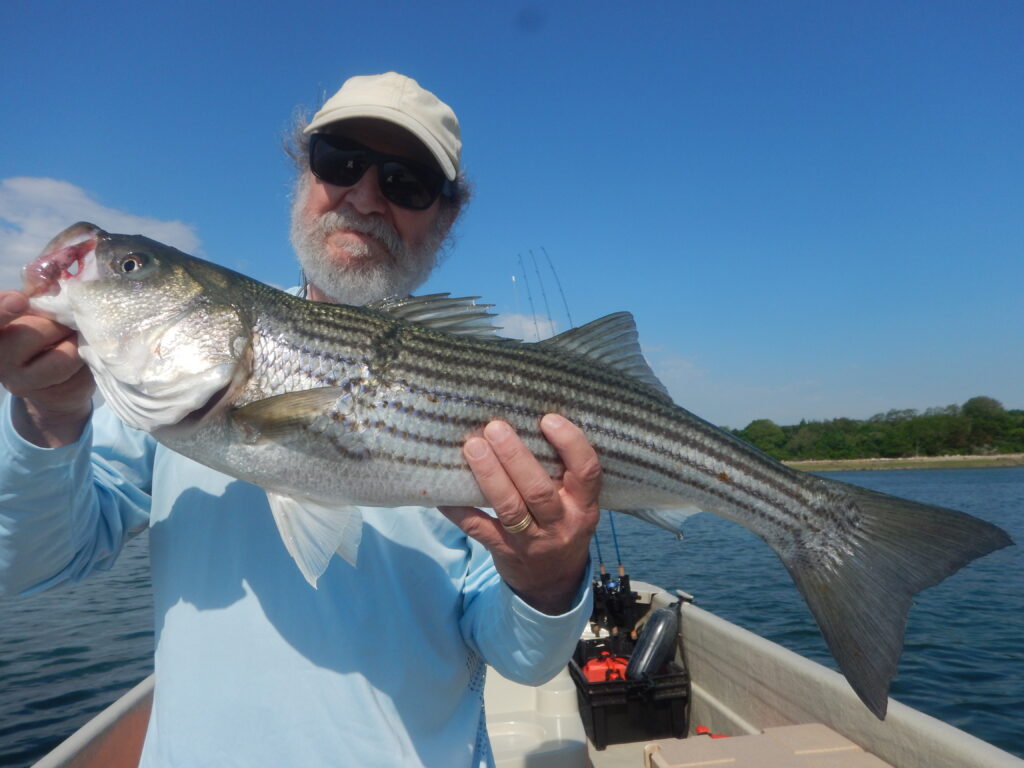 I decided to cut across the bay and head for Howland’s to try and get out of the wind. It was little use. The winds still found a way to rock us and made fly casting near impossible and the Easterly had shut the bite down cold. So, I warned Greg it was going to be rough heading back to the dock at town pier and we got back to Bug Light and turned North. Oh – my – gosh did we take a pounding! The four foot waves (five?) lifted the skiff and beat us up good. The wave period was so short, they lifted up the stern out of the water many times and I was concerned we were going to spin strip the prop. It was a wild ride! 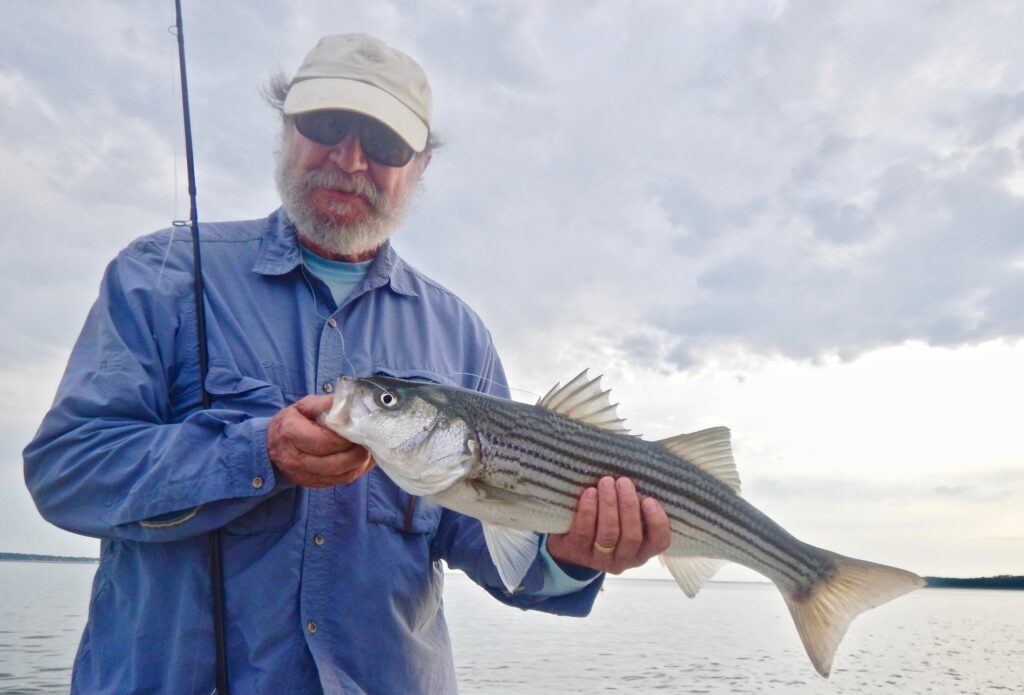 Back at the dock safe and sound, a hot coffee and pastry at French Memories, and great conversation about Greg’s fly fishing adventures in Belize and other places closer to home. All in all, a fun morning on the bay and some great fly rod fish.