On board today. Lt. Col. Richard “The Machine” Comstock for fly or die striped bass fishing.

At first light, WNW winds and chop and it pretty much stayed that way most of the day. Two and a half hours into the trip, we had yet to find a fish and we were both secretly thinking this day was going to be a bust.

Then, after a lot of hard work and spot jumping from structure to structure around the bay, we landed our first striped bass of the morning. There were no birds anywhere on the bay and there was no topwater action anywhere. So, structure fishing was the natural game plan. 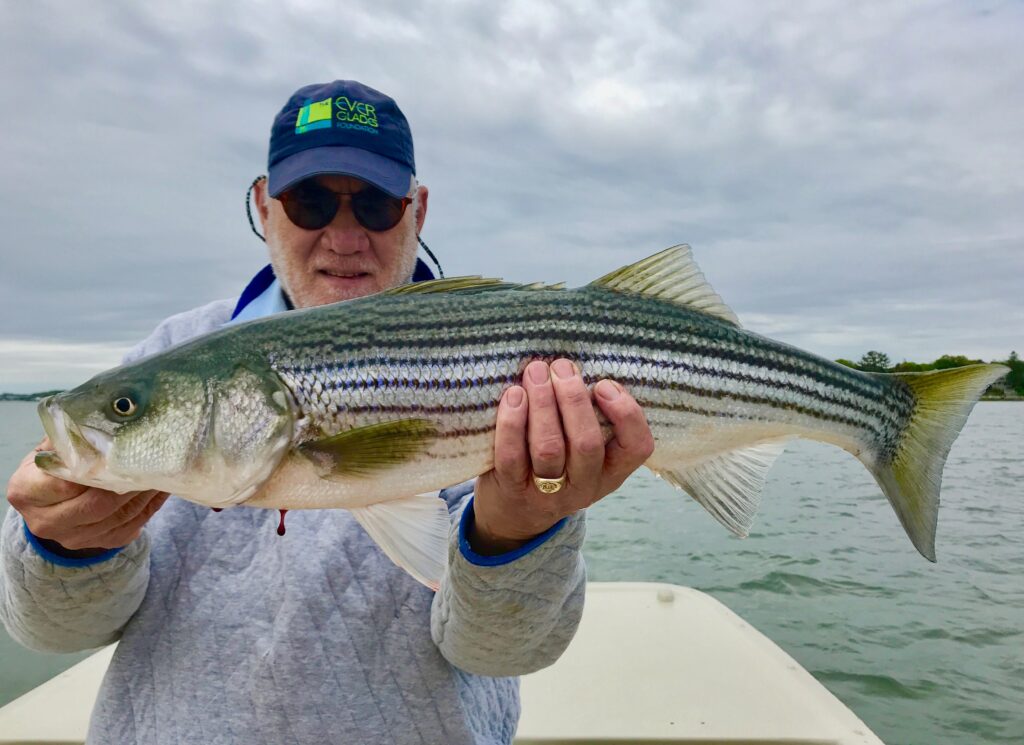 Heading towards yet another structure spot with only 1 fish landed, I spotted a small flock of birds working – and a nice school of fish busting bait on the surface – finally! From this point in the the trip until we came back in, it was game on! We switched from intermediate to sinking lines and from a Baymen Universal to a Mike Rice Peanut Bunker pattern (due to wind), and began to hook up on every drift.

The winds and chop began to come and go, and the Colonel said, “I’m going to a floating line and a popper. “You are crazy, I advised. Advise ignored, he picked up his TFO 9 wt, Orvis Igniter floating line, rigged with a foam popper from Bear’s Den that looked like a tiny, yellow perch. “Not going to happen” I thought to myself. WHAM! Fish On! Well, what do you know!

The rest of the trip, the Colonel did not put the popper rig down. Wicked winds and chop blew up at times, but he just kept going and kept hooking up, fish after fish, in 2-4 fow up on the flats on the dropping tide. The hits were wild and crazy. Some were sucked in, and some where hit like a bolt of lightning. There is nothing so exciting as fly fishing with a topwater popper for striped bass!

We ended the morning catching and releasing 18 fish. Our two biggest taping out to 28 1/2″ inches and 27″ inches. All the fish are very fat and healthy looking, and fight very hard.